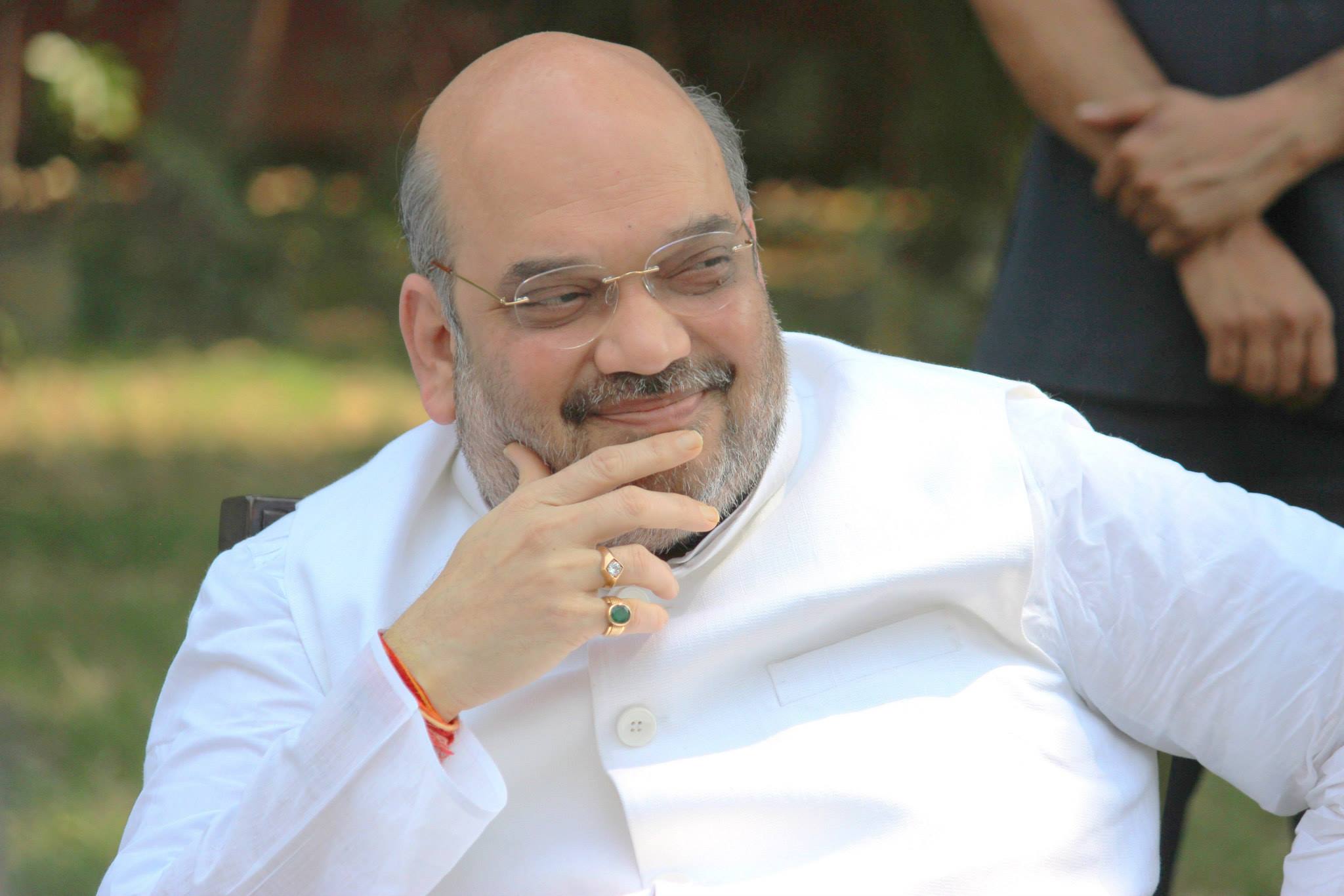 Amit Shah was born to Smt. Kusumben and Shri Anilchandra Shah, an affluent Gujarati family in the year 1964 in Mumbai.

He lived and studied in his paternal village Maansa, Gujarat until the age of 16, when upon completion of his school education, his family shifted to Ahmedabad. As a young boy he was always inspired by the stories of the great patriots of the nation and dreamt of working for the progress of the motherland. He was especially inspired and influenced by the nationalist spirit and vision of Rashtriya Swayam Sevak Sangh (RSS) and became its active member in Ahmedabad. This was one act that was to change his life forever and set him on a momentous journey towards the leadership of the Bharatiya Janata Party.

After joining the RSS, Amit Bhai worked for the student’s wing of the RSS – the Akhil Bharatiya Vidyarthi Parishad for over four years. In 1984-85, Amit Shah became a member of Bharatiya Janata Party (BJP). His first assignment was that of a poll agent at Ahmedabad’s Naranpura ward, followed by secretaryship of the Naranpura ward. Successful completion of these missions earned him the higher responsibilities as National treasurer of BJYM and then as the State secretary and State Vice-President of Gujarat BJP. In these roles, he actively campaigned to expand the base of the young political party.

His abilities to keep his ear to the ground and establish deep and lasting connect with party workers enabled him to hone his organizational capabilities. These abilities came to fore and to the notice of people when as in charge of the Amhedabad city; he successfully handled mass mobilization of people in favour of the Ram Janambhoomi Movement and EktaYatra. The Ram Janambhoomi Movement resulted in a groundswell of support for BJP and drew tremendous response from Gujarat. These mass movements were followed by the Lok Sabha Elections in 1989, wherein he was entrusted with the task of managing the election campaign of BJP’s mass leader Shri L.K. Advani from Ahmedabad constituency. This was an association that would last for over two decades with Amit Bhai formulating electoral strategy for Shri Advani till the 2009 Lok Sabha polls. He was also the election in-charge of former Prime Minister Shri Atal Bihari Vajpayee when he contested from Gandhinagar. Amit Bhai had earned a reputation for himself as an astute election manager. The political upheaval in Gujarat during 1990 overturned established fortunes and BJP emerged as the principal and only opposition party to the Congress in the state. During this time, Amit Bhai, under the able guidance of Shri Narendra Modi the then Gujarat BJP’s Organisation Secretary, initiated and successfully completed the difficult but all important task of documenting party’s primary members across the state. This was a critical first step to garner the party’s strength and electoral prowess. The subsequent electoral victories of the BJP in the state demonstrated the efficacy of harnessing and motivating its party workers in the pursuit of state leadership.

The political upheaval in Gujarat during 1990 overturned established fortunes and BJP emerged as the principal and only opposition party to the Congress in the state. During this time, Amit Bhai, under the able guidance of Shri Narendra Modi the then Gujarat BJP’s Organisation Secretary, initiated and

successfully completed the difficult but all important task of documenting party’s primary members across the state. This was a critical first step to garner the party’s strength and electoral prowess. The subsequent electoral victories of the BJP in the state demonstrated the efficacy of harnessing and motivating its party workers in the pursuit of state leadership.

BJP’s first stint in political power in Gujarat was relatively short lived as the party that stormed into power in 1995 fell in 1997. Yet, during this short period, Amit Bhai, who was made the chairman of Gujarat State Financial Corporation, turned around the company and even got it listed on the Stock Exchanges. This was also Amit Bhai’s first foray into the election arena, as in the by- election that followed the fall of BJP government; he successfully contested assembly polls from Sarkhej winning the seat by a margin of nearly 25,000 votes. Realizing the pressing need to regain the confidence of voters and mandate from the people, Amit Bhai dedicated himself to the task of strengthening the party in the state. At the same time, he continued to discharge his duties as a MLA and even won from the same seat by over 1.30 lakh votes in 1998.

A key achievement of Amit Bhai’s political career was breaking the stranglehold of the Congress over Gujarat’s cooperative movement, which was a source of electoral strength and influence. In 1998, barring a single Cooperative Bank, all other cooperative institutions were controlled by the Congress. This was set to change as thanks to Amit Bhai’s political acumen and ability to carry people along, BJP started to win elections for cooperative banks, milk dairies, and agriculture market committees. These successive victories established BJP political strength and influence in rural and semi-rural areas. His success though was not limited to electoral affairs. Under his Chairmanship, the Ahmedabad District Cooperative Bank, the largest district cooperative bank in Asia – turned profitable in just one year. The bank also declared a dividend for the first time in a decade. Given his wide experience, and commendable success, Amit Bhai was made the national convener of BJP’s cooperative committee in 2001.

In 2002, as a prelude to the assembly elections, AmitBhai was made the co-organiser of the ‘Gaurav Yatra’. The party stormed into power in the state under Chief Minister Shri. Narendra Modi. This time too, Amit Bhai won his seat from the Sarkhej constituency for the third time in a row. This time, the margin of victory was even bigger at 1,58,036 votes. Amti Bhai was given the key ministries of Home, Transport, and Prohibition and his work as Gujarat Home Minister was much appreciated. His popularity and connect with people increased with time. In 2007, Sarkhej electorate again showered its blessings on Amit Bhai with a victory margin of a massive 2,32,832 votes. He returned to the state cabinet and was given responsibility of a number of key portfolios including Home, Transport, Prohibition, Parliamentary Affairs, Law, and Excise.

His policies were appreciated by many as going beyond the norms. An avid chess player himself, Amit Bhai became Chairman of Gujarat State Chess Association and introduced chess on a pilot project basis in Ahmedabad’s government schools. This resulted in making students more alert, raised their concentration levels and improved their problem solving abilities. In 2007, Shri Narendra Modi and AmitBhai became Chairman and Vice Chairman of Gujarat State Cricket Association, respectively and ended the 16-year old Congress domination. During this period, he was also Chairman of Ahmedabad Central Board of Cricket.

The year 2010 was one of unprecedented challenges. The UPA government under Congress slapped charges of a fake encounter against Amit Bhai and he was imprisoned. His innocence was vindicated later when the Gujarat High Court observed that there was no prima facie case against Amit Shah. The Congress conspiracy met the same fate, as did earlier electoral encounters with Amit Bhai. He was released on bail within 90 days and the politics of vendetta was badly defeated. Later, a special CBI Court also absolved AmitBhai of all charges on the ground that the case was “politically motivated”.

Amit Bhai’s electoral victories continued unabated. In 2012, he won his fifth straight victory from the newly carved Narayanpura assembly segment. This time he won by over 60,000 votes despite the delimitation reducing the number of voters to a mere one fourth of the original number. The party recognized his electoral talent and in 2013 when he was made General Secretary of the BJP ahead of the crucial Lok Sabha polls in 2014. This was a high point in his long and arduous political journey. There was little time for celebrations though as Amit Bhai realized that he had the huge task of leading BJP to a comprehensive victory in the general elections. As one who was known as a master of electoral mathematics with an eye for smallest of data points, AmitBhai knew that a win in Uttar Pradesh was the key to taking power at the Centre. He spent the next year visiting every nook and corner of the state, energizing and motivating party workers, and pushing BJP’s development agenda along with BJP’s PM Candidate Shri Narendra Modi’s vision. The results were spectacular with BJP and its allies winning 73 of the 80 seats in the state. With this big push from Uttar Pradesh, BJP crossed the 272-mark in Lok Sabha with a majority on their own strength.

The BJP recognized the commitment, hard work and organizational capabilities of Amit Bhai and made him the President of the party in 2014. With more power comes more responsibility. In less than one year of taking over as BJP’s National President, Amit Bhai travelled to each and every state in the country to push the party’s ideology and enlarge party membership. The results of this drive were startling. He made BJP world’s largest political party with over 10 crore members. His resolve to strengthen BJP did not end at making it world’s largest party as he initiated number of programs to spread party ideology and its mass connect. One of such programs was “Mahasampark Abhiyan” aimed at engaging newly acquired members in party’s programs.

The combination of PM Modi’s leadership and Amit Bhai’s well-crafted election strategies resulted in BJP winning four of the five assembly elections held during first year of his tenure as party president. While the party had its chief ministers in Maharashtra, Jharkhand and Haryana, it formed coalition government in Jammu & Kashmir.

Despite his hectic schedule and numerous public engagements, Amit Bhai loves to unwind by listening to classical music, playing chess and watching a game of cricket. He has keen interest in “stage performances” also as he himself performed on several occasions during his student life.