Founder of the Bharatiya Jana Sangh 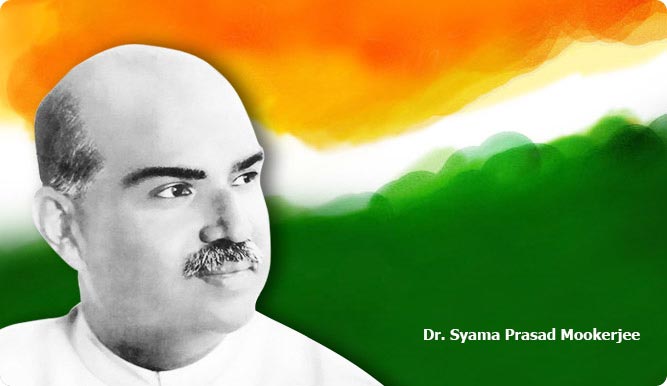 The BJP is the successor party of the BJS, which merged itself into the Janata Party in 1977. The BJP was formed as a separate party in 1980 after internal differences in the Janata Party resulted in the collapse of it’s government in 1979.

Dr. Mookerjee’s mother Jogmaya Debi exclaimed, on hearing of her son’s death.
“Proudly do I feel that the loss of my son is a loss to Mother India !”

Born on 6th July 1901 in a famous family. His father Sir Asutosh was widely known in Bengal. Graduated from Calcutta University he became a fellow of the Senate in 1923. He enrolled as an advocate in Calcutta High Court in 1924 after his father’s death. Subsequently he left for England in 1926 to study in Lincoln’s Inn and became a barrister in 1927. At the age of 33, he became the world’s youngest Vice-Chancellor of the Calcutta University and held the office till 1938. During his tenure, he introduced a number of constructive reforms and was active in Asiatic Society of Calcutta as well as was a member of the Court and the Council of the Indian Institute of Science, Bangalore and Chairman of the Inter-University of Board.

He was elected as member of the Legislative Council of Bengal as a Congress candidate representing Calcutta University but resigned next year when Congress decided to boycott the legislature. Subsequently, he contested the election as an independent and got elected.

He became the opposition leader when Krishak Praja Party – Muslim League coalition was in power 1937-41 and joined the Progressive Coalition Ministry headed by Fazlul Haq as a Finance Minister and within less than an year resigned. He emerged as a spokesman for Hindus and shortly joined Hindu Mahasabha and in 1944, he became the President.

After the assassination of Gandhiji, he wanted the Hindu Mahasabha not to be restricted to Hindus alone or work as apolitical body for the service of masses and broke away from it on this issue on November 23, 1948.

Pandit Nehru inducted him in the Interim Central Government as a Minister for Industry and supply. On issue of Delhi pact with Likayat Ali Khan, Mookerjee resigned from the Cabinet on 6th April 1950. After consultation with Shri Golwalkar Guruji of RSS Shri Mookerjee founded Bharatiya Jana Sangh on 21st Oct. 1951 at Delhi and he became the first President of it. In 1952 elections, Bharatiya Jana Sangh won 3 seats in Parliament one of them being that of Shri Mookerjee. He had formed National Democratic Party within the Parliament which consisted 32 members of MPs and 10 of Members of Rajya Sabha which however was not recognised by the speaker as an opposition party.

To voice his opposition he turned outside Parliament and on Kashmir he termed the arrangement under Article 370 as Balkanisation of India and three nation theory of Shaikh Abdullah. Bharatiya Jana Sangh along with Hindu Mahasabha and Ram Rajya Parishad launched a massive Satyagraha to get removed the pernicious provisions. Mookerjee went to visit Kashmir in 1953 and was arrested on 11th May while crossing border. He died as detenu on June 23, 1953.

A veteran politician, he was respected by his friends and foes alike for his knowledge and forthrightness. He outshined all other Ministers in the cabinet except perhaps Pandit Nehru by his erudition and culture. India lost a great son at a very early stage of Independence.