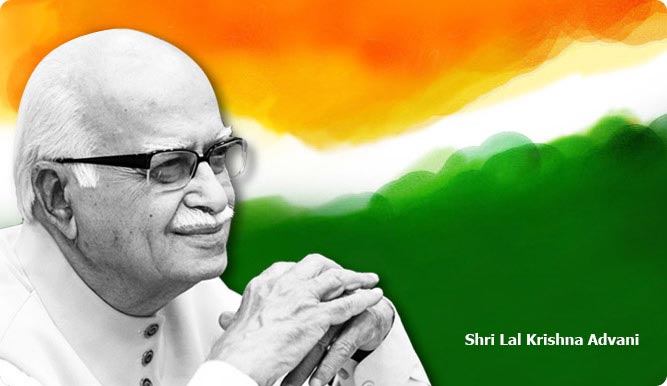 L K Advani is currently Chairman of BJP Parliamentary Party.
Through the years Advaniji had served as the President of the Bharatiya Janata Party for the longest period since its inception in 1980. Capping a parliamentary career of nearly three decades, Advaniji was, first, the Home Minister and, later, the Deputy Prime Minister in the cabinet of Shri Atal Bihari Vajpayee (1999-2004).

Advaniji is widely regarded as an individual of great intellectual ability, strong principles, and unwavering support for the idea of a strong and prosperous India. As confirmed by Atalji, Advaniji has ‘never compromised on his core belief in nationalism, and yet has displayed flexibility in political responses whenever it was demanded by the situation’.
Advaniji was born on November 8, 1927, and grew up in pre-Partition Sindh. As a student in St.Patrick’s School, Karachi, his patriotic ideals inspired him to join the Rashtriya Swayamasevak Sangh (RSS) at the mere age of fourteen. He has dedicated his life to the service of the nation ever since.

Advaniji’s celebration of India’s independence from the British in 1947 was sadly short lived as he became one of the millions to be torn from his homeland amidst the terror and bloodshed of the tragedy of India’s partition. These events, however, did not turn him bitter or cynical but instead spurred him on in his desire to create a more secular India. With this goal in mind he journeyed to Rajasthan to continue his work as an RSS Pracharak.
Through the latter half of the 1980s and the 1990s, Advaniji focused on the singular task of building the BJP into a national political force. The results of his efforts were underscored by the 1989 General Election. The Party bounced back from its 1984 tally of 2 to achieve an impressive 86 seats. The Party position moved up to 121 seats in 1992 and 161 in 1996; making the 1996 elections a watershed in Indian democracy. For the first time since independence, the Congress was dethroned from its preeminent position, and the BJP became the single largest party in the Lok Sabha.

An emotional individual with strong family ties, Advaniji has said that ‘nature dangles happiness and meaning before us all, insisting only that we choose between them, but I have had the good fortune of experiencing both, and in abundance’.
Today, Advaniji asks the people of India to make the right choice, in choosing a leader who has lived through the mistakes of India’s past, and looks forward to ensuring that India becomes more united, stronger and stands taller with its Tomorrow brighter than its Today. 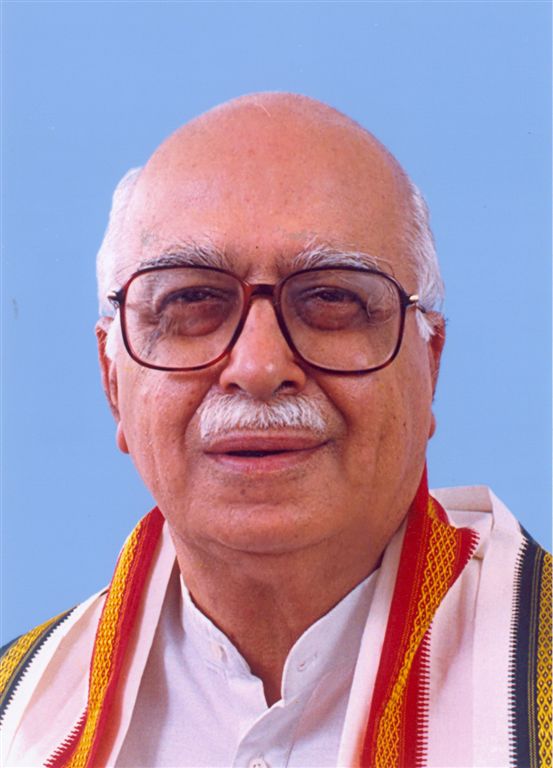 November 8, 1927 – Shri L.K Advani was born in Karachi, in present day Pakistan, to parents Kishenchand and Gyanidevi Advani.
1936-1942 – Studied at St.Patricks school, Karachi, standing first in every class until matriculation.
1942 – Joined the RSS as a Swayamsevak.
1942 – Joined Dayaram Gidumal National College, Hyderabad, during the Quit India movement.
1944 – Held a job as a teacher in Model High School, Karachi.
12 September, 1947 – Left from Sindh to Delhi by propeller aircraft during Paritition.
1947-1951 – Organised RSS work in Alwar, Bharatpur,Kota, Bundi and Jhalawar as RSS Secretary in the Karachi branch.
Early 1957- Shifted to Delhi to assist Shri.Atal Bihari Vajpayee.
1958-63 – Held the position of Secretary of the Delhi State Jana Sangh.
1960-1967 – Joined the Organiser , a political journal of the Jana Sangh as assistant editor.
Feb 25, 1965 – Married Smt. Kamla Advani, with whom he has two children, Pratibha and Jayant.
April 1970 – Entered the Rajya Sabha.
Dec 1972 – Was elected President of Bharatiya Jana Sangh.
26 June 1975 – Was Arrested in Bangalore during Emergency period and taken to Banaglore Central Jail along with other BJS members.
March 1977 to July 1979 – Held the position of Union minister for Information and Broadcasting .May 1986- Became Party President of the Bharatiya Janata Party (BJP).
1980-86 – Held the position of General Secretary of the BJP.
May 1986 – Was announced as party President of the BJP.
3 March 1988 – Was re-elected party president of the BJP.
1988 – Held the position of Home Minister in the BJP Government.
1990 – Began the Ram Rath Yatha from Somnath to Ayodhya.
1997 – Began the Swarna Jayanti Rath Yathra to celebrate the Golden Jubilee of India’s Independence.
Oct 13 1999 – May 13 2004- Held the position of Deputy Prime minister.